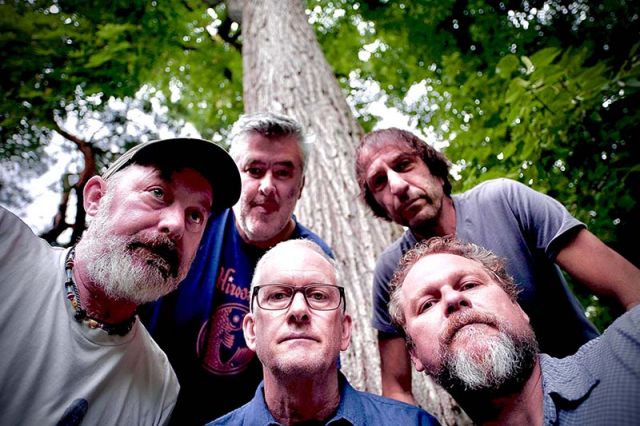 On the fringe of the indie Rust Belt scene since the 1990s, Moviola has quietly forged a low-key career of high-quality recorded output over 25 years, issuing 10 records and countless 7” inch singles (including splits with Cobra Verde, Hiss Golden Messenger, Handsome Family and many others) In this artistic continuum, Moviola has evolved from everything from 4-track fuzz to hi-fi country soul. Today, the band steps forward with Broken Rainbows, its strongest collection of songs to date, written, recorded, and mixed inside the group’s HQ in Columbus.

Jake Housh started Moviola in 1993 as a student at “The” Ohio State University as a noisy, fuzzed out lo-fi noisemakers. Over the years, the band has morphed into a unique DIY music and art-making collective with five distinct singers and songwriters, recalling the creatively democratic lineage of The Mekons, The Band, Pink Floyd, many others. Moviola is Jake Housh, Ted Hattemer (Thomas Jefferson Slave Apartments), Scotty Tabachnick, Greg Bonnell, and Jerry Dannemiller.

Broken Rainbows is a milestone release, showcasing a band newly energized and assured in its artistry, and supportive of its members' songcraft. The 11-song album hovers over a plot of ground that’s optimistic in its despair. Album topics range from the personal to the political, showcasing each member’s unique songwriting within an overall cohesive band aesthetic.

Broken Rainbows (the album) came together throughout the disquieting (and deadpan, and dubious) latter half of 2020 in Jake's home studio. If crows foreshadow sadness or grief, there was a flock overhead during those days (and, sadly, they continue to circle). We gathered carefully to talk, write music, and talk more. We've been friends and done this for nearly three decades, so it was muscle memory. Broken Rainbows is how we processed and survived, made sense. It's a five-headed declaration.

Broken Rainbows: Deadpan Charms and Dubious Yarns (the show) got rolling when Adam Elliott at the Wexner Center (of the great band Times New Viking) asked us to play a show for the release of our 10th record, Broken Rainbows, coming out in September 2021. After a few zoom calls with "Wex" folks, and some band conversations around the fire pit, pretty soon we all had the idea that a typical "show" wasn't really in the cards. We'd kick ourselves if we didn't take full advantage of the opportunity, big stage, and production values afforded to us, y'know? The date was set for Sept. 24. Over the summer the ideas came, left, turned right, circled for landing and took off again. Taking inspiration from various and sundry places (camping trips in Kentucky, Terry Allen's Juarez, Gempler's catalogs, Young Jean Lee, Spalding Gray, Jewish cemeteries, Bobby Darin, and even Neil's Live at the Ryman), we set out to develop the 11 songs on Broken Rainbows into a full...piece, with narratives, interstitials, video, a coyote, a giant bass drum, and assorted video remnants from our early days. Three of our kids sang back up (Camille and Haley Housh, Toby Hattemer), which proved to be an amazing addition, and deeply joyful for everybody. Scotty practiced all by his lonesome up in Brattleboro like a champ, and even Jake's brother, Josh, in from Oakland, joined us for the fun. We had a blast doing it in front of so many family and friends. We'd love to actually do it again. If you can help with that, let us know.

As an old friend said to us after the show, it feels like you guys are just starting to hit your peak after 30 years a band.

Late bloomers, we are.

"Moviola was one of those groups I met early on back in the day that showed me how to do it. ‘Broken Rainbows’ is a highlight—pastoral thumpers, fuzzy indie radness, hooks to spare, pretty much all the good stuff. Feels like a glorious drive from one disparate end of Ohio to another. I love this band." - Eric Johnson (Fruitbats)

“(Broken Rainbows is…) wry songs, human voices and sounds calling back classic rock radio vibes from my midwest youth, cut with enough present-time weirdness and mystery to keep me in it. Mostly I can feel the love and longtime journey that exists between these guys.” - Tim Rutili (Califone)

“Basement Tapes-rusted glee, a bit of Dead yarn-spinnin’, the crackling exhaust of ‘90s indie guitar pop — with an aged sense of nuance and depth of range that’s been learned. I love this record.” (Kevin Elliott, Alive)