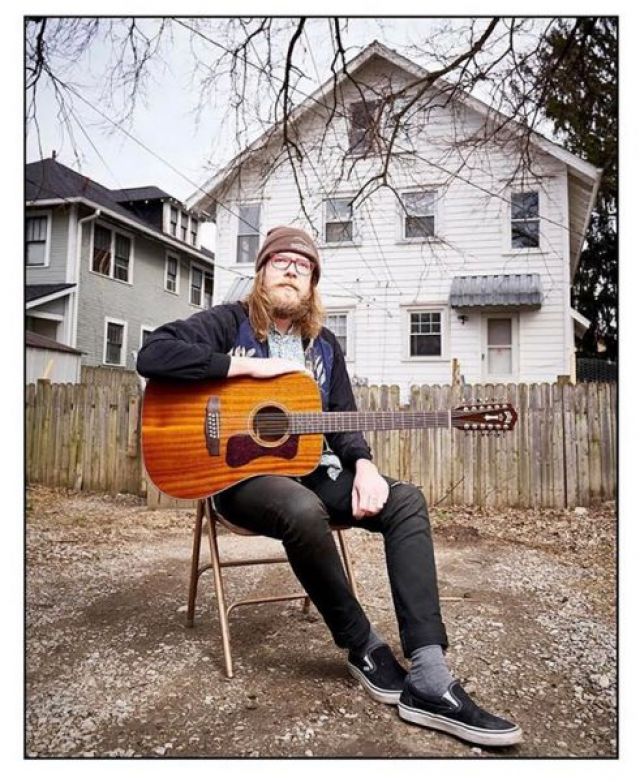 “We are living in something of a golden age of fingerstyle guitarists. This glut can be both a blessing and a curse, as it becomes increasingly difficult for even the most discerning of fans to distinguish one player from the next, however capable these players might be.

It is always a pleasure, then, to hear the ways in which the braver and brighter guitarists re-think the tradition from the ground up and recast it in their own image. Enter guitarist Matthew J. Rolin, who plays as if he was born with a dreadnought in his hands. The Ohio-based guitarist’s artistic leaps in recent years are rivaled only by those of Daniel Bachman, another once-precocious player formerly in the John Fahey / Jack Rose mold who has over the years transcended the idiom to create his own singular, deeply personal music. Rolin’s latest LP, the double album The Dreaming Bridge, makes similar strides.

For many practitioners of this style, the first and perhaps most challenging feat is to escape the gargantuan shadow of Fahey. Some do this by adding other instruments or field recordings to their DADGAD ruminations; some opt to play electric. Of course, Fahey did all of those things, too. Better still to have not been directly influenced by Fahey in the first place: Rolin’s initial embrace of the acoustic guitar was inspired not by Fahey himself, but rather by Fahey-influenced guitarists like polymath Jim O’Rourke and trickster prodigy Ryley Walker.

This vicarious influence is exemplified by Rolin’s distinctive, at times irreverent approach to guitar soli. While the influence of Walker’s nimble 12-string probing is evident on tunes like Rolin’s impressionistic “10:30 AM,” and while the guitarist’s patiently unfolding, contemplative “Weeping Willow” indeed recalls O’Rourke’s masterpiece Happy Days, Rolin remains very much his own man, with his own idiosyncratic approach. This is clear from the first notes of The Dreaming Bridge’s opening track “Pinhole,” which introduces Rolin’s affinity for shimmering, almost choral, reverb, the effect doubling as a compositional element. Similarly, on the overtone-rich “Drown,” Rolin’s virtuosic playing is practically a duet with its own echo, an effect deployed not to obscure, but to buoy. This deep attention to atmosphere serves a crucial function on The Dreaming Bridge, which sparkles throughout with a strident, Zen-like focus

Then there are the tunes themselves. Terrific tunes! Like William Tyler—another possible influence—Rolin, despite largely working from the necessarily limited palette of instrumental solo guitar music, thinks like a songwriter. This more traditional approach can be heard on tracks like “Moonlight” and “Backyard Blues” which follow a compositional logic complete with verses and choruses. Rolin performs these compositions beautifully; as a player he is dexterous and dynamic, with a light and agile touch reminiscent of early Will Ackerman or Alex De Grassi.

Album highlight “Hallucinations” features saxophonist Patrick Shiroishi’s keening, double tracked reed work, which at times simulates the sound of a two violins playing cat and mouse between the stereo channels. Rolin wisely cedes center stage to Shiroishi for the track’s first third, supplying gently supportive arpeggios beneath, before the sax fades and Rolin responds. There is something about the unexpected combination of sax and acoustic guitar—not exactly easy bedfellows—that brings to mind both postmodern chamber ensemble Entourage and progressive new age pluralists Shadowfax.

Rolin is joined by partner and collaborator Jen Powers on the meditative and marvelous “When I Could See,” a painterly duet for two dulcimers (one Appalachian, one hammered) that is as rich and transporting as their excellent duo LP released last year.

“Bells” (not an Albert Ayler cover), a tone poem for singing bowls, crickets, water, and the ringing of various small bells, eventually gives way to the massive sidelong title track. Structured a bit like a canon, “The Dreaming Bridge” inventively and somewhat impishly simulates aspects of post-Takoma guitar music using some unlikely tools: electric guitar, a looper, and various fuzz and distortion pedals. Note the way the tube-rattling distorted guitar begins substituting for the reverberating whole notes that would typically be the job of the thumb in a traditional Travis picking tune. The sidelong piece, its mood somewhere between apocalyptic and oddly triumphal, gradually builds and crests for over 15 minutes before its waves of stoner tumult and slo-mo tremolo twang begin to recede. We are left with nearly three full minutes of the sound of rushing water cascading from rain gutters. It’s as if the guitarist, satisfied with the web he has just spun, has placed his instrument in its case and has stopped to listen to that other music all around us, and invites us to do the same. You’d be wise to accept this challenge, but not before listening to The Dreaming Bridge, an early candidate for one of 2021’s best guitar records, and Rolin’s finest work to date. Keep two eyes on this guy.” – James Toth