The Devil Doves have a new album and it's now streaming on Listen Columbus! Go check out their latest release Also Playing, and stay tuned for upcoming shows! 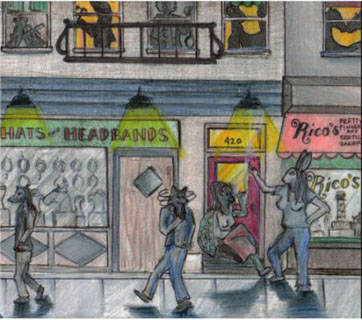 On their new release, “Also Playing,” the Devil Doves’ sound has departed significantly from their 2015 eponymous debut album. The ultra-percussive attack that characterized the previous effort has been filled out and somewhat sweetened by the addition of keyboardist Jeff Straw and the occasional lead guitar riff. While there is still plenty of crunch, Straw’s whimsical organ and saloon piano offer a welcome bit of melody to fill out the space between Junior Kauffman’s vocals. Read more

With the annual Community Festival in full-swing on Saturday, I found myself dodging pedestrians meandering their way in and out of Goodale Park as I made my way to Woodland’s Tavern.

The reason I was skipping ComFest on Saturday evening was the invitation to see The Devil Doves album release show at Woodland’s Tavern, celebrating their newest musical effort, “Also Playing.”

Unknowingly, I was about to experience a cluster of sounds that was at once comforting, while also myriad in its influences. It’s not too often that I am surprised by a band, but dare I say… they did indeed pleasantly surprise my aural synapses.Read more